Today we’d like to introduce you to Jennifer Hill Booker.

She’s an African American woman of strength and character who can creatively meet life and culinary challenges with grace. Her passion for the culinary world knows no boundaries from creating new recipes, to teaching culinary arts, presenting live cooking demonstrations, keynote-speaking engagements and in the digital world where she engages with her online community.

Her focused attention to detail came through loud and clear when she was a contestant on the Food Network’s Cutthroat Kitchen competition food show.

Life experiences have given her a special sensitivity to sharing her joy of cooking with others including single, working moms and military families. She takes pleasure in teaching people to cook healthy and delicious food. With her extensive culinary endeavors as a professional chef, culinary arts instructor and cookbook author, Chef Jennifer Hill Booker is like having your favorite chef in the kitchen with you! She is an inspiration and role model for girls and modern women who are balancing life’s many challenges.

Chef Jennifer’s culinary path has not always been a linear one. She earned her Bachelor’s Degree from the University of Tulsa before graduating first in her class; eighteen months later, with an Associate of Occupational Science from Oklahoma State Institute of Technology. Extensive travel while married to a United States Army Officer pushed Jennifer to blaze a trail that fit her unique situation-a female African American chef, living abroad. As a result, her culinary company Your Resident Gourmet was born. During her time living in Germany, Jennifer honed her culinary talents by providing cooking classes for both military and German families. She was also able to fulfill a lifelong dream of attending Le Cordon Bleu College of Culinary Arts in Paris, where she once again graduated top of her class. Twenty years later Jennifer finds herself once again blazing culinary trails as she wears many culinary hats as chef, cookbook author of Field Peas to Foie Gras: Southern Recipes with a French Accent and Dinner Déjà Vu: Southern Tonight, French Tomorrow, reality TV personality, culinary educator and business owner. 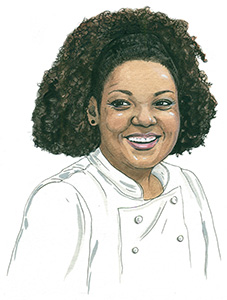 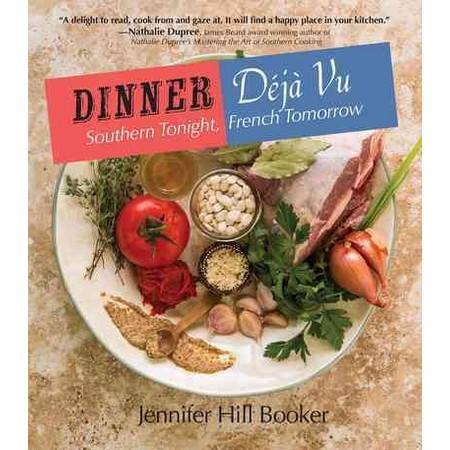 She is a Georgia Grown Executive Chef for the GA Department of Agriculture, the Culinary Explorer for the Georgia Department of Tourism and Travel, is the founder of Southern Divas of the New South Dinner Series. Chef Jennifer is an active member of the prestigious Atlanta chapter of Les Dames d’Escoffier International, a member of SlowFood-Atlanta and of Atlanta’s No Kid Hungry Atlanta Society. Chef Jennifer currently sits on the James Beard Foundation Food Waste Advisory Council.

Weaving her love of traditional Southern cuisine with her belief in incorporating healthy, seasonal foods and her classic French training, Chef Jennifer created a unique style of cooking that she terms Modern Southern Healthy Cuisine with a French Accent. Chef Jennifer shares this brand of cooking through her, many television appearances, with original recipes in such publications as Waste Not Cookbook, Southern Living Magazine, Garden & Gun and Essence Magazine as well as her Food Network debut as a finalist on Cutthroat Kitchen. Her website, ChefJenniferHillBooker.com provides information about healthy eating, culinary trends, travel, and recipes that reflect her culinary point of view of Modern Southern Healthy Cuisine with a French Accent.

Chef Jennifer spends her free time in her kitchen creating new recipes, gardening, or at her local farmer’s market. She currently resides in Lilburn, Georgia with her two daughters Jenelle and Regine and their KorgieJack, Pudge.

We’re always bombarded by how great it is to pursue your passion, etc – but we’ve spoken with enough people to know that it’s not always easy. Overall, would you say things have been easy for you? Being a women in the culinary industry has not always been a smooth ride, and being a Black woman made it even less so. I have often had to blaze my own culinary trail in order to make it fit with my life being a wife, mother, woman, Black woman. I think the biggest struggle is being underestimated because I’m a woman and not being embraced in the kitchen like my many male counterparts. I’ve been told I was not strong enough to move the pots on the hotline, not included in ‘downtime’ at work because I’m not one of the guys, that having a female in the kitchen would be a distraction and have even been accused of sleeping around if I got a coveted shift or promotion. Then there is the added struggle of being black in a kitchen that is all white. Perhaps one of the hardest struggles, early in my career, was not seeing anyone who looked like me in the kitchen-female or black. Which makes seeing so many badass female chefs in the culinary industry right now,

one of the greatest joys in my career.

So, as you know, we’re impressed with Your Resident Gourmet – tell our readers more, for example what you’re most proud of as a company and what sets you apart from others. Your Resident Gourmet is a manifestation of my Southern heritage and classical French culinary training. I view it as a modern reinvention of Southern cuisine that incorporates the traditional use of seasonal ingredients that I grew eating with French culinary techniques she I learned from her my training at OSUIT and at the Le Cordon Bleu College of Culinary Arts in Paris-which I jokingly refer to as my ‘finishing school’.

Her I’m definitely proudest of my first cookbook, Field Peas to Foie Gras: Southern Recipes with a French Accent, (Pelican Publishing, 2014), because it includes original recipes from my family’s farm in Charleston, Mississippi. This book gave me the platform to break the stereotype that Southern cuisine is just gravy and grease. That’s a myth. Southern cuisine is not only delicious but healthy and elegant as well. And that’s what really makes Your Resident Gourmet shine. Our ability to present food as it’s meant to be eaten-fresh, seasonal and delicious. I also feel that I have the culinary insight to give my customers what they desire. For example, in my second cookbook, Dinner Déjà Vu: Southern Tonight, French Tomorrow, (Pelican Publishing, March 2017). I use one list of fresh ingredients to create two separate dishes, one Southern and one French. It’s a practical and innovative way to tackle the question of what’s for dinner. Dinner Déjà Vu offers a creative approach to ‘repurposing’ leftovers, saves trips to the market, and equally important; saves money and reduces food waste. There are combined grocery lists in the back of the book and time-saving tools for recipes from cocktails to desserts throughout, making Dinner Deja Vu the go-to cookbook for busy cooks. It’s also my favorite cookbook because it models my actual life as a home cook!

So, what’s next? Any big plans? I’m a year out from being an ’empty nester’ which is both terrifying and liberating. In the meantime, I’m currently working on two new cookbooks-a cocktail book and the other is top secret. There is some great travel in the near future starting with a trip to Paris next Spring, (March), for a culinary tour. So far I have a pop-up dinner at NOLA Paris scheduled, a book signing in the Red Wheelbarrow, a Hands-on Cooking class and a Champagne & Amuse Bouche Pairing. I’m so very excited about this trip because I feel like my culinary training and career as a professional chef have come full circle.

I (think) I’m ready for a ‘brick and mortar’ space. Maybe a bistro, cooking school, a retail space or a combination of three. Somewhere I can hold court, cook some really good food, flirty cocktails and share culinary wisdom with up and coming chefs.

Plan your menu around your grocer's weekly sales ad. Your ingredients will be in stock, in season, and on sale!

Cook Once & Eat Twice. Cook a double batch of dishes like soups, beans and chili-for those days you don't feel like cooking!